Rabbi Sergio Bergman will be the featured speaker for the UPJ Biennial, and we are truly inspired by his his many accomplishments. Rabbi Bergman recently said: "I prefer not to use energy on internal divisions (e.g. between Orthodox and Progressive]. I want to welcome those Jews who feel they do not belong. Today, we need to be resilient, flexible and open-minded, especially post-COVID-19. It's a catalyst for change. It's very Jewish, from every bad thing to make a good one." Click on "READ MORE" below to learn more about Rabbi Bergman's remarkable life.

Jane Figgis, president of Temple David, shared an article she wrote for the Maccabean, Perth's Jewish newspaper, about the joyous celebration at Temple David for its 70th anniversary on 22 July. Here are some excerpts from Jane's article: "Rabbi Ettlinger spoke about the nature of Progressive Judaism and the balance required to maintain our rich tradition while responding to the times." "It was one of the best events we have attended in 40 years of Temple David membership. It was fantastic to witness both a full sanctuary and function centre with over 200 people in attendance." CLICK HERE to read the full article in The Maccabean online. 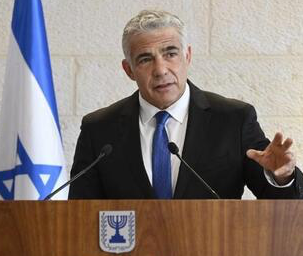 Following the attack on Progressive and Masorti Jews at the Kotel last week by a mob of Ultra-Orthodox boys and men, a letter was sent to Prime Minister Yair Lapid from David Knoll AM and Brian Samuel OAM, Co-Presidents of the Union for Progressive Judaism, Helen Shardey OAM, President of the Australian Reform/Progressive Zionist Association and Vice-President of the Union for Progressive Judaism, and Eric Lundberg, President of Mercaz-Masorti Australasia, asking for the Prime Minister’s continued support of the Kotel agreement, ensuring that all streams of Judaism can pray with safety and security at this most sacred place. CLICK HERE to read the letter.

Beutel and Bergman Seminars kick off in Israel 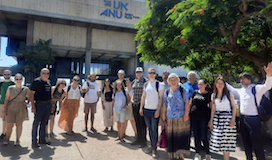 Participants from 10 different countries - including day school teachers, rabbis, religious school directors, community leaders and community directors - began their Bergman and Beutel Seminar experiences last week in Israel. The UPJ was proud to sponsor the attendance of two members from the UPJ region: Cassie Barrett (Beutel) and Asher Myerson (Bergman). CLICK HERE to read the full story and see more photos, and if you are interested in taking part in the 2023 seminars, contact the UPJ at This email address is being protected from spambots. You need JavaScript enabled to view it..